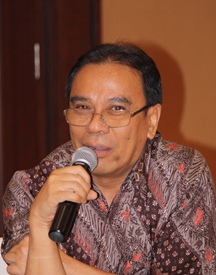 Prof.dr.Irawan Yusuf,Ph.D, completed his medical doctor undergraduate at the Hasanuddin University Faculty of Medicine Makasar in 1984. In 1992 he received his PhD in the field of molecular and cellular cardiac electrophysiology at the School of Medicine, University of Hiroshima, Japan.

He has been a lecturer at the Department of Physiology, Faculty of Medicine, Hasanuddin University of Makasar since 1986. He was appointed as a Vice Dean in 2002 and continued his career as a Dean from 2006 to 2014 at the same Faculty. His university promoted him as Professor of Physiology in 2005. Between 1995 and 2002 he joined as a Senior Researcher at Eijkman Institute in Jakarta. He had been invited as an external examiner on the Ph.D exams at Leiden University (2007), Utrecht University (2009), and Amsterdam University (2013) in the Netherlands. In 2015 Prof Irawan Yusuf became a visiting professor at Kyoto University, Japan.

His career as a researcher began 1987 and his main areas of research interest are pharmacogenomics, genetic aspects of infectious and non-communicable diseases and the interaction between genetic and environmental factors against infectious and non-communicable diseases. This research activity has resulted in more than forty scientific publications in international journals.

Prof. Irawan Yusuf was involved in various higher education and health research activities, including being a member of the proposal assessor for the Ford Foundation from 2004-2008 and of the research proposal review team for the Danone Institute since 2008.

He was honored with the best of Head of Study Program from Ministry of Research and Technology, Republic of Indonesia in 2009 and received in 2010 the 20 Years Satya Lencana Karya from the Government of Republic Indonesia. He received the Juned Pusponegro award from Indonesian Medical Association (IDI) in 2012 and Ahmad Bakrie Award for Medicine in 2013. He was the Chair of the NECHRI Steering Committee (Novartis Eijkman Hasanuddin Clinical Research Initiative), an institution formed by Novartis, the Eijkman Institute and Hasanuddin University which focuses its activities on research on tuberculosis and dengue fever. He was appointed as Chair of Ethic Committee at Mochtar Riady Institute for Nanotechnology, Member of National Research Board, National Bioethics Commission and Deputy Chair of the National Commission on Health Research Ethics. From 2007 to 2009 he was a Chairman of Indonesian Medical Association, and from 2009 – 2012 he was a Chairman of Indonesian Medical Colloqium. He is a member of the Indonesian Academy of Sciences since 2008.